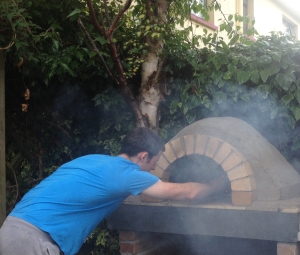 I’m James, originally from Cork in southern Ireland and currently on a journey into the world of grain. There is no doubt that the cultivation of grains has led to the tremendous success and growth of the human population. Grains are a dependable food source that can be stored for long periods of time and travel great distances. Almost every culture on earth includes grain to some extent as part of their diet. Many nations are identified by grain-based products, such as bread in France, beer in Germany and tortillas in Mexico. Other nations depend on grain as an essential staple for survival, such as rice in Asia and quinoa in the Andes region of South America.

Wheat is one of the most impressive grains and has successfully managed to spread its way across the globe, starting from its humble beginnings in the Middle East where humans first started to cultivate wild grasses about ten thousand years ago. Humans soon realized that when ground into flour, mixed with water and cooked in an oven, this grain resulted in a satisfying and nutritious food source. Since then, bread has become one of the most widely eaten foods in the world.

French baguette, Italian ciabatta, German rye, Greek pita, Indian naan; bread has evolved along with the cultures that embraced it. However, in the last several decades, much of the worlds bread has been taken in a different direction. Modern production facilities and techniques have resulted in mass-produced loaves that lack nutrition and flavor. The prevalence of supermarkets and the convenience they offer consumers has solidified growth in the mass-produced bread industry. Supermarket bread needs to be able to travel long distances and remain on a shelf for several days while still appearing ‘fresh’. Your typical supermarket loaf could contain up to 37 ingredients.

Real bread is making a resurgence in the artisan scene. Farmers markets, cafes/restaurants and local bakeries are offering naturally leavened sourdough bread like never before. Its a return to the olden days where bread was comprised of three simple ingredients; flour, water and salt. Nothing else.

I encourage you to get involved. Check out the recipe section and try your hand at making naturally leavened sourdough bread at home. And take a moment to appreciate the grains that play such an important role in feeding us all. Join me as I meet the farmers, millers, bakers and brewers that provide us with these grains and their end-products.