Farmers markets have a strong presence in New Zealand and a Saturday morning in Auckland boasts several to choose from. The Kiwi’s clearly see these outdoor, social, community gatherings as a welcome alternative to supermarket shopping. Fresh fruit and vegetable stalls usually take center stage and are snugly encircled by other artisan producers offering chocolate, cheese, meat, fish, eggs and coffee. But no farmers market is complete without a stall offering freshly baked bread.

Winter has officially arrived in New Zealand but the dipping temperature hasn’t kept people at home by the fire. I pull up to Mt Albert farmers market at 10 AM and the place is buzzing. I have lined up a meeting with the founder of Bread and Butter, an established bakery in Auckland offering organic and sourdough breads and pastries. Isabel Pasch opened the flagship bakery and café in Grey Lynn back in 2013. Two more locations have since been opened, one in Ponsonby and another in Milford. Bread and Butter also operates a significant wholesale offering as well as appearing at three of Auckland’s farmers markets. Isabel is training a new girl to manage the bread stall at the market and after grabbing a seat at one of the tables, she begins to tell me about some of the difficulties in finding the right staff:

“Ideally, I try to find people that are interested in bread so it’s easier for them to pick it up. You find at markets that people really do want to know about the bread; what’s in it, who baked it, when was it baked, what’s a sourdough etc. We have a training manual that explains the breads, what sourdough is, what gluten is, what the different grains are and what they mean nutritionally. It’s about finding people that are interested in learning about bread and getting a solid understanding of what we offer. I encourage the market staff to take home any leftover breads and try them. This makes it easier for them to give a genuine opinion to customers when they ask what bread they would recommend or what would go well with a blue cheese or a soup, for example”

Q – Three cafe’s in Auckland bear the name of Bread and Butter so things seem to be going really well. Could you tell us how you came to end up in New Zealand?

A – I studied a masters in microbiology here in 1999 and fell in love with the country and also a Kiwi. After the masters we moved together back to Berlin where we lived for close to ten years and in that time we got married and had two kids. We then decided to move back to New Zealand. The schools here are fantastic and the lifestyle is great. I have two boys so I can easily send them outside to play in the garden and not need to worry about them.

Q – I imagine that your studies and understanding of microbiology would very much relate to sourdough bread making. Could you talk a little about that relationship?

A – Well in retrospect it does fit into it in a big way. Especially from a nutritional standpoint and explaining to people why sourdough bread is better for your health. I did my thesis on gut fermentation, not in humans but a lot of the literature that I read was in relation to humans as well. When I did my thesis, there was very little information on this topic, but the advancements in DNA technology and the amount of data available has led to scientists making some really exciting discoveries in this area.

We can now experiment with a group of people to monitor exactly what they are eating to see the effect those foods have on the composition of microbiota in their gut. We see that bacteria break down all the waste that passes through our gut and we absorb the resulting by-products. We get a lot of minerals, vitamins and essential amino acids that we need for our system. But if we are eating unhealthy and processed foods, bacteria will break this down also and the resulting by-products are detrimental to our health.

Many health issues today come from this very source. They come from people eating food that has petrochemicals in it, artificial colorings, preservatives, emulsifiers; these all get broken down by bacteria and it has a significant effect on our immune system. It can cause allergies, affect our neurotransmitters, affect our mood; it’s all related to what we eat and how that food is broken down by bacteria and absorbed into our system. Processed foods are particularly bad because they are low in fiber and very high in these artificial additives.

Q – Being from Germany, could you talk a little about the bread culture there and what breads or grains are typical?

A – Rye and spelt have always been popular in Germany because they grow in poorer soils. Wheat on the other hand needs quite rich soil as well as a warmer climate. In the southern part of Germany, they do eat more wheat bread, but anywhere from the middle of Germany upwards its predominantly rye. Rye can be planted in autumn, it sprouts and then snow can fall and freeze over but it won’t kill the crop. The growing season is  short and that gives it an advantage. You can only sow wheat after the last frost so by the time the wheat has germinated and grown the rye has already come a long way.

Q – How do you source your rye flour here in New Zealand.

A – Rye is actually not so much of a problem here in New Zealand and there are a few farmers who grow it. The problem in New Zealand is wheat because New Zealand soils are lacking in selenium and selenium is an essential mineral for wheat. Consequently, the wheat grown in New Zealand can be quite low in gluten which results in poor baking qualities. New Zealand is also lacking in farmers that are growing organic wheat so based on these factors we source our wheat from Australia.

Q – Being an organic bakery, can it be challenging to source organic flour here in New Zealand?

A – Yes, it can. A big challenge is the fact that there is predominantly only one mill in New Zealand that does proper milling and sifting, it’s called Farmers Mill based in the South Island. In the 1950’s and 60’s, Australian milling companies came over and bought up all the smaller independent mills in an effort to dominate the market and export the flour from Australia. This resulted in a lack of knowledge around growing and milling wheat here in New Zealand, especially in a sustainable and organic way.

Another major challenge with sourcing flour is to get consistency. It’s pretty dramatic when the flour changes. In conventional flour, the mills have quite a lot of farmers that they source from and they blend the flour to be very consistent. However, with organic, it can be more difficult to get this consistency. Wheat will be very different depending on the soil it grows in, the micro-climate, the seasons and other factors that will determine the strength of the flour and how much protein it has. If your flour changes, it can have a serious impact on your recipes. You might need more water, less water, change baking times, proving times, the result isn’t the same as what customers are used to, the color is different; changing flour can introduce these challenges which can cause upset to a full-on production operation.

Q – Could you talk a little about the fermentation process in the breads that you make?

A – We have various fermentation methods depending on the bread. Because we do wholesale, we do a lot of bulk fermentation. We make a lot of our breads with a high percentage of starter, so some breads would comprise about 60 or 70% starter that has been fermented for 24 hours. And because we use so much starter in the final mix, we might ferment the final loaf for about 5 hours. That gives us the ability to accept orders of sourdough breads for next-day delivery.

Q – What is the typical work schedule for a bread baker at Bread and Butter?

A – Most of our bakers start at three in the afternoon because the majority of our wholesale bread gets picked up between 3 and 5 AM. They would typically start with the baguette sourdough because that takes 9 hours to ferment. Then they would move on to the other long-ferment sourdoughs such as the dark rye and wholemeal sourdough, then on to the white sourdough. We also wholesale a lot of products that are not sourdough such as burger buns and bread rolls, so they would prepare those last. The oven guys come in at about 8 o clock at night and bake until 2 or 3 in the morning.

Q – How many bakers do you currently have employed?

A – Nine bakers at the moment.

Q – It seems like there is high demand in New Zealand and Australia for qualified bakers. Do you find it difficult to get suitable staff?

A – Absolutely! There is no real bread culture in New Zealand. Also, the culinary degree here is over the course of two years and focuses on both bread and pastries. Generally, they teach very little about sourdough. The vast majority of people that do these courses in New Zealand are from overseas where naturally leavened sourdough bread just isn’t part of the culture. Many use it as a ticket to get into the country as the qualification is on the skills shortages list.

I often take on German bakers as they tend to be highly skilled and qualified, I currently have two German bakers. My head baker is Polish who has been working as a baker for fifteen years. I have tried to take on some younger people as apprentices but few have finished it. It’s not really seen as a profession to aspire to here in New Zealand because there simply isn’t a strong bread culture, unlike what you find in Italy, France or Germany.

Q – Would you recommend it as an enjoyable line of work?

A – Like anything really, you simply need to be passionate about it. I personally think it is one of the most beautiful jobs out there. To create bread out of flour and water, there is something pretty magical about that. The smell of freshly baked bread is just amazing. Bread making is also probably one of the oldest professions, aside from farming. It makes people happy and its good for their health.

I thank Isabel for her time and slip away from the busy market. On my way home, I stop at the Grey Lynn location where the Bread and Butter venture started out and currently houses the main bakery. It’s almost a full house with few tables available as popular breakfast and brunch items appear in high demand. 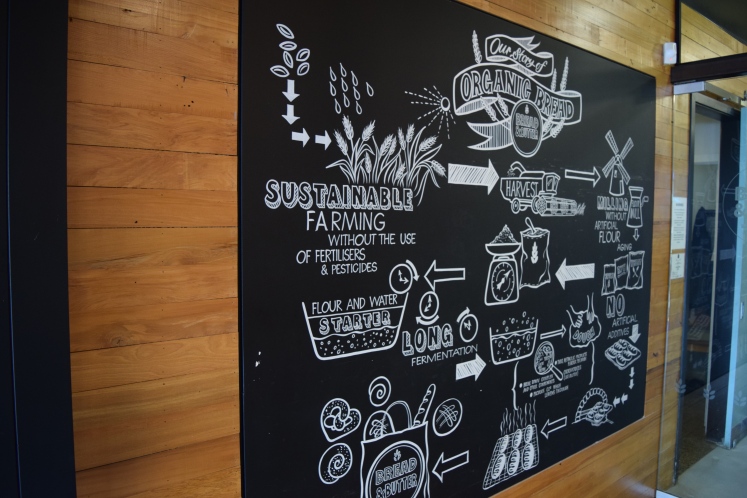 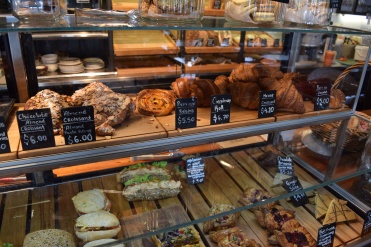 Pastries and sandwiches on offer 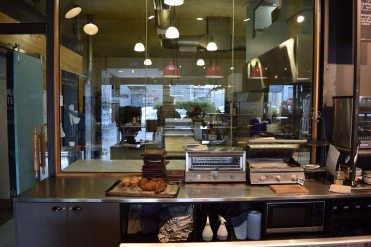 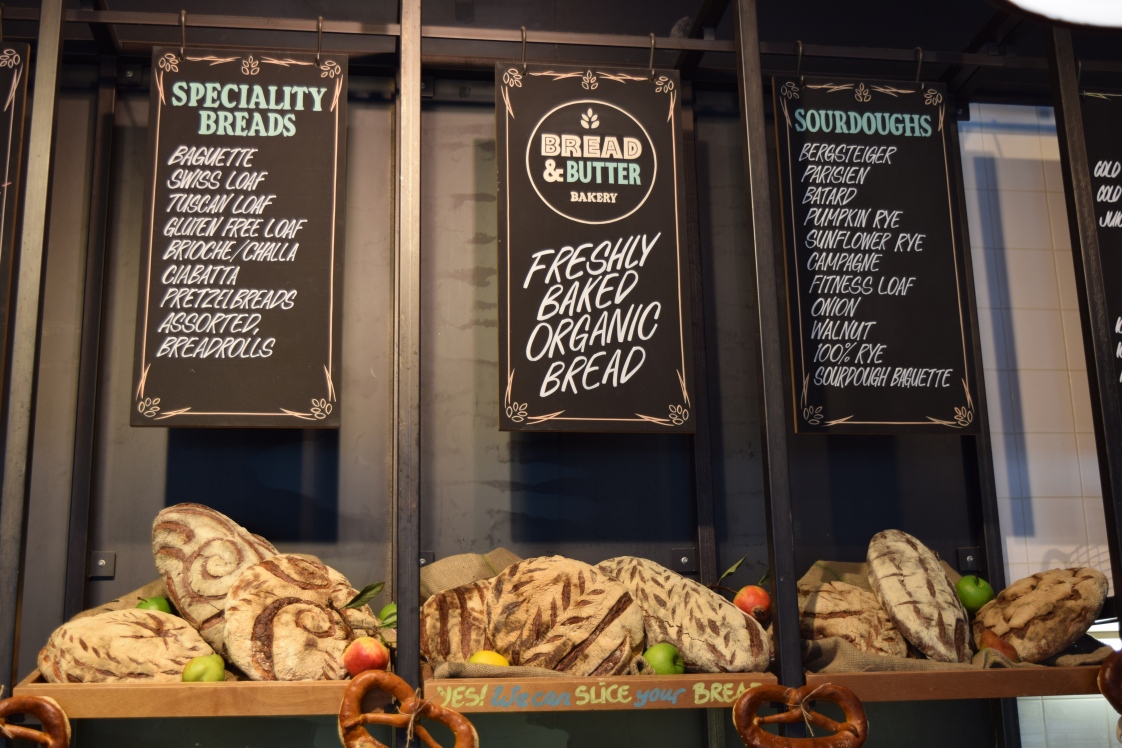 Breads on offer
All in all, Bread and Butter is an impressive player in the Auckland bread scene and it’s driven by a person who is passionate about bread and the nutritional benefits that sourdough can offer. A big effort is made to work with farmers that grow their grain in an organic and sustainable way. This relationship will become increasingly important for other bakeries to take on as customers become more conscious of the products they consume, wanting to ensure that the ingredients were produced in an ethical and sustainable way. 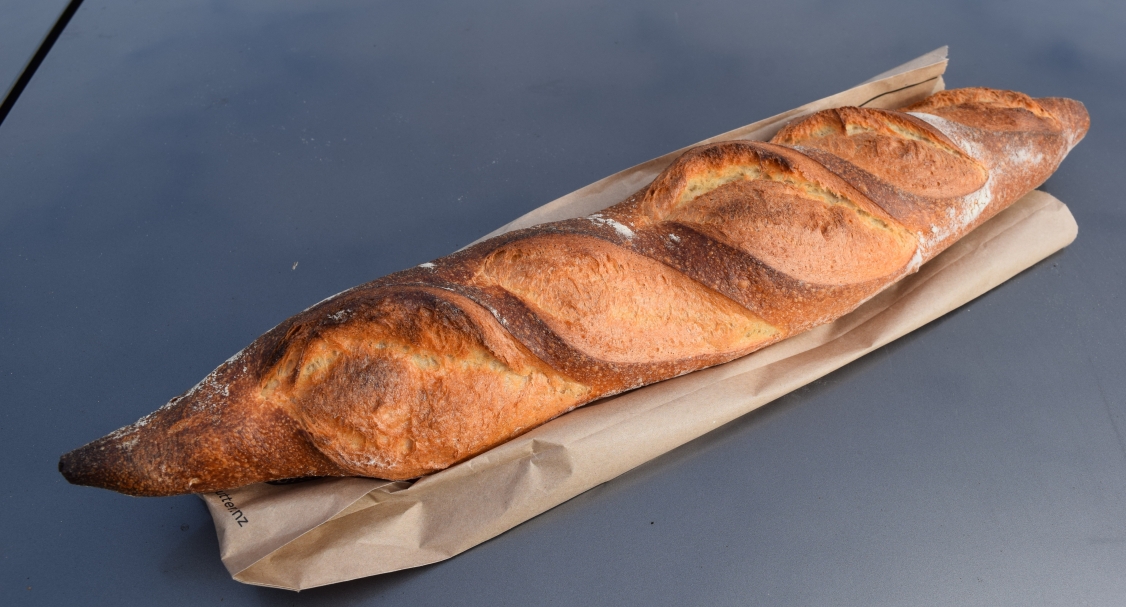